Jonas Gunnarsson, broadband manager at Karlsborg Energi AB: “We have been through an exciting journey in Karlsborg’s metro network. It began in 2001 when we won the municipal tender and were commissioned to build the network. Our municipality’s geographical position requires a comprehensive urban network so we built an extensive network backbone throughout the city of Karlsborg.” 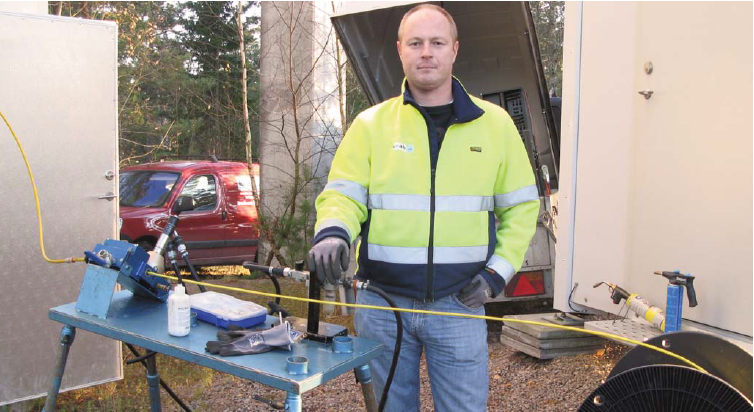 Rala has been there from the beginning

“We have worked with Rala right from the start as both supplier and a sounding board“, sais Jonas. “They have high quality products that work and they offer great expertise and experience in this type of project. It has been a sense of security all the way for us.”

As always in projects that involve digging up the streets and to build any network structure you should at the same time prepare for other infrastructure. “It was exactly what we did“, says Jonas. “We installed the duct, which would also cover the private market’s future needs. Once we had built a backbone throughout Karlsborg, we also built a fibre area. The individual market was not as big then, but back in 2002, we began to connect some household
and for the first few years we had around 30% acceptance rate. Today, of course, most households are connected. Not just in the city centre of Karlsborg but also in the countryside.”

It is not very profitable for private companies to invest in broadband to rural areas. But as a municipal company with access to an extensive metro network, the situation is different and Jonas says that he was proud of all the effort: “It’s great that we as a utility company could offer this service. We have locations in the forests that have fiber today, though they would actually qualify as EU project. Energy companies’ role is important for the local diversity.”

Cooperation with the municipality

“We work closely with Karlsborg municipality“, says Jonas. “Today it is we who manage their network operation, and we are also in charge of IT services. Emergency preparedness we share. Everything works very well and the city network has become a purely ‘win win’ project.”

Karlsborg is not alone in the region to invest in infrastructure. As are the neighbouring municipalities Tibro, Hjo and Tidaholm were early. “We made a joint tender already back in 2005“, explains Jonas. “It was a district nurse binding network and cabling via ADSL. For this purpose we created a joint company which we still own together. Collaboration between municipalities has always been rewarding. We relieve each other and share our experiences.”

Rala has been there from the beginning

“Rala’s materials are well-proven and works exemplary together“, Jonas says. “But when we started we saw them as expensive. We didn’t see how valuable the groundwork would be for us. Now I have a duct structure that is not fullyoccupied after 12 years. When they came with their micro duct structure the capacity increased enormously. Today we can install about 10 micro ducts in a 40-mm duct. For example, when a tenant is to be connected, we just plug in a JetNet machine and blow the fiber.”

2003 Karlborg Energi turned to another supplier because they thought that Rala was expensive. But when it was time to blow out the fibre cable it didn’t work. “It ended with the fact that we had to call Rala again and ask them to come and help us“, laughs Jonas. “It gave us more insights. First, of all Rala isn’t more expensive in the long run, rather the contrary, since everything is working smoothly. Rala also has its own skills that we have had great benefit from during the whole projects.”

“Today we use them often as a sounding board and consult with regard to dimensions, materials, etc. They have very much experience, and skilled personnel; there is no doubt about it. And today they stand up well in competition, also price-wise.”

“Rala’s materials
are well-proven
and exemplary
works together”

“I have only good things to say about Rala. Rala is always offering good and innovative solutions and rearranges when you need help with anything. They always try to solve your problems“, says Jonas.