Värnamo Energi is a municipal utility company that offers its customers energy and IT communications through a well-developed infrastructure. Just as Rala, Värnamo also puts the customer in focus and invest in high skills in their own company. 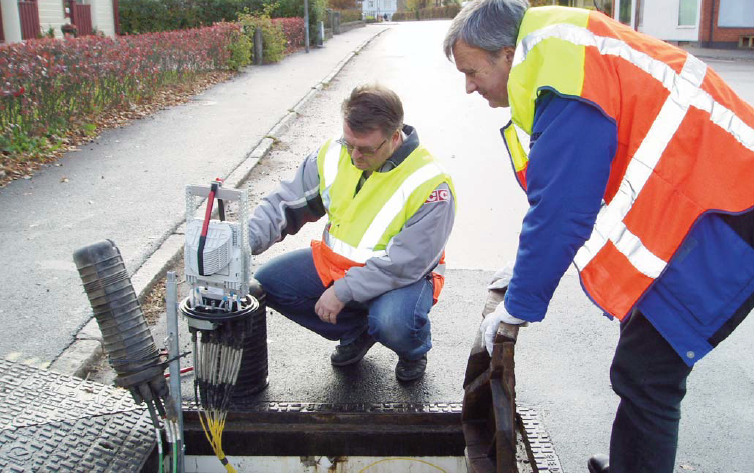 Gradual expansion of the infrastructure

Värnamo Energi has built the infrastructure incrementally. “It all started in 1986 in conjunction with the installation of district heating projects. We took the opportunity to install the fibre at the same time”, remembers Nicklas.

“At that time there were very few who understood why to invest in fibre which meant that our former CEO was almost idiot declared. 10 years later we won a contract to expand the City’s network. Suddenly we could make use of the fiber, and then the CEO was praised to the skies. More and more companies wanted to connect to the network until the fibre cable were fully occupied. Then the CEO again was questioned. It’s not easy being a frontrunner”, laughs Nicklas.

“In 2004 we started working with Rala“, says Nicklas, “a collaboration that has become increasingly close over the years, especially since we started to connect individual households, at a higher rate. At that time we built traditionally, using 40 mm duct that maximum could contain three fibre cables. It was an enormous amount of cable and in addition, we used the old concrete chambers that were not really suited for communication. The technology was good at that time but it came to be much better in the coming years.”

Both our contractors had chosen Rala

“What happened in 2004 was that the state came up with so-called Rosengren-money. It was the money that you could get to develop infrastructure in smaller towns. Success story – Our municipality’s main town, Värnamo, was too big but we won the contract for 13 locations in the more rural area”, says Nicklas.

“We chose to work with two different contractors. Both contractors chose Rala as the supplier of fibre and ducts. Furthermore Rala helped us out with the network design. The big change compared to our previous jobs was that Rala introduced micro duct. It allowed us to save enormous on costs for excavation, which is usually the most expensive part of a project. The cables we used previously were traditional fibre cables of about 14-15 mm. Now we reached the same result with fibre cables that were down to 3.9 mm.”

“In the beginning we thought that Rala was too expensive“, says Nicklas. “But gradually, we have seen the benefits they can generate and not least financially. When we did the big buildings we took the opportunity also to withdraw the tubes to all sites we passed, even in central Värnamo. We have benefited greatly from that decision.”

Do it right from the start

Since Värnamo Energi began to connect individual households in 2004, they have done several major expansions in close cooperation with Rala. “Sure you can get the material for a few cents less elsewhere“, says Nicklas, “but it doesn’t pay off. Rala offers a total solution and they are always available to discuss and advise us as the projects are moving along. We have seen that other major players that make similar expansions are working in exactly the same way as we do. The difference is that we did it several years earlier. I’ve actually never heard anyone who has said that we have built our network in the wrong way or made bad choices.”

“Rala is always
available to discuss
and advise with us.”

The relationship is crucial

Nicklas Lundin has been in the industry a long time and he believes that personal contact is extremely important: “We discuss both simpler and more complicated issues – which fibre cable is suitable in each situation? How many fibre cables can we have in a chamber? How far can you take a fibre cable before installing a cabinet and so on. In addition, developing the products continuously with new manholes, splice boxes, and fibre cables. In short, we choose Rala for the big picture – quality products that work together, friendly service and excellence“, says Nicklas.